Police are appealing for witnesses to a serious collision in Cromford this afternoon, which has left a woman seriously injured.

The collision is thought to have involved a silver van, which is reported to have hit a pedestrian and a dog.

Air ambulance were called and the pedestrian, a woman, was taken to hospital.

We would like to speak to anyone who was in the area around the time and saw the incident or may have dashcam or CCTV footage.

In particular, we would like to trace the driver of a black pick-up type vehicle which was also in the area as they may have witnessed the incident.

The Hill at Cromford has been closed with the help of Derbyshire County Council highways while an investigation is carried out. We would ask motorists to find an alternative route.

Anyone with information should contact us on the non-emergency details below, quoting reference 751-130921. 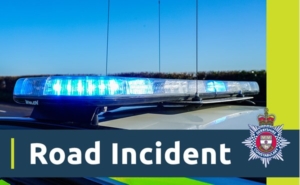 Police are appealing for information after a woman was grabbed and assaulted close to Swan Lake, near Ilkeston. The incident occurred at around 10.10pm last night (9 September) on Derby Road and saw a woman in her 20s grabbed and sexually assaulted by a man who appeared from the Nutbrook Trail. The woman managed to fight the man off and run away. Officers are keen to hear from anyone who may have been in the area at the time of […]