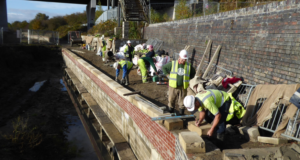 Plans to restore the Chesterfield Canal by 1.6 miles have been approved. This will extend the navigable section in Derbyshire by a third from Staveley almost to Renishaw. It will include a 37m long aqueduct almost 10m above the River Doe Lea.

There remains lots of preparation to be done, but there should be works on the ground by the end of this year or early in 2022.

The restored canal currently ends at Eckington Road Bridge in Staveley, where the Chesterfield Canal Trust’s volunteer Work Party has built a new lock and restored a further 300m of canal. The new section will go through a disused railway line and across the Doe Lea Valley on the Staveley Puddlebank. This is a huge embankment nearly 800m long and up to 10m high that was a wonder of the age when constructed in 1776. The canal then turns north and runs parallel to the Doe Lea to the borough boundary.

The towpath will be a 3m wide all-user trail alongside the canal, so walkers, cyclists and mobility scooter users will be able to join boaters, canoeists and paddleboarders in enjoying the new route.

The application was submitted by the Chesterfield Canal Trust through its Development Manager, George Rogers. Although endorsed by lots of members of the public and numerous organisations including the Ramblers, Chesterfield Cycle Campaign and Chesterfield Civic Society, HS2 Ltd. objected. The canal runs underneath HS2’s proposed line to a maintenance depot. However, negotiations with HS2 earlier in the year led to the objection being withdrawn, leaving the way clear for council approval.

Chair of the Chesterfield Canal Trust, Peter Hardy, said: “We are delighted that our planning application has been approved. This is a substantial step on the path to achieving our ambition of reopening the canal fully by 2027. We would like to put on record our thanks to our many supporters and partners who have backed us so far and who we know will stick by us in the exciting years ahead.”

The Trust is hoping to start its Rewatering Renishaw project in the coming months, which will bring a further 1,000m of canal back to life. This will mean that there could be a total of 7½ miles of canal from Chesterfield to Renishaw by the end of 2023.

Once this has been achieved, lots of opportunities for tourism will open up including the hire of dayboats, weekend boats, canoes, paddleboards and cycles. There will be a need for more pubs and cafés, and anglers will be delighted by new opportunities.

At the same time, Staveley Town Basin, now renamed Staveley Waterside, will be developed by Derbyshire County Council and there are plans for a whole new village on the old Staveley Works site, including a hotel and small marina.

Rod Auton, Publicity Officer for the Trust, said: “The next few years will see an incredible transformation along the canal which will bring a massive economic boost to the area. It is our hope that the Chesterfield Waterside development will also continue, including opening the canal basin. This would connect the town directly into the beautiful, green and tranquil oasis that is the Chesterfield Canal.”

Chesterfield Canal Trust supports the marketing and economic growth of the town through Chesterfield Champions, a network of over 180 organisations across Chesterfield and North Derbyshire.