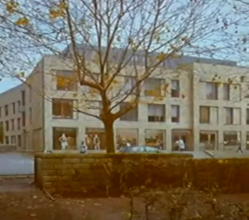 A plan for 47 town centre apartments across the road from Matlock’s Hall Leys Park received enthusiastic support from the District Council’s Planning Committee on 10 August.

No member of the committee voted against and there was just one abstention on an application that will see the partial demolition of existing buildings at the former Matlock Ford site in Causeway Lane, followed by the erection of a building comprising one and two bed apartments and a ground floor retail unit.

Fronting onto Causeway Lane will be a four-storey building comprising ground floor retail accommodation plus 14 upper floor apartments, while to the rear of the site – next door to Matlock Town football ground – a further three and four storey new build structure will feature 33 apartments with an undercroft area for parking at ground level.

Each apartment will have mechanical ventilation heat recovery system, while a roof-mounted array of photo voltaic panels will provide power to all the communal external and internal areas and car charging points within the undercroft parking areas accommodating 47 vehicles. The scheme will also feature cycle storage.

The developer – Clowes Developments – has offered to make a contribution of £195,000 towards local affordable housing.

The developer’s agent, Caroline McIntyre, told the meeting that after a previous application featuring a retirement complex was refused, the developer’s professional team had worked for the past year with council officers to come up with a new vision for the site.

Responding to objections to the project’s architecture from Matlock Civic Association, she said the design of the building was contemporary rather than “a pastiche of the town’s Victorian architecture” and it would add to the vitality of the town centre.

She added that the Environment Agency was happy in principle with the scheme following detailed flood modelling of the site and that the apartments – none of which will be at ground level – would not be at risk of flooding and the scheme would not have a flood impact on other nearby properties.

The range of benefits of redeveloping what Ms McIntyre described as “a vacant eyesore site” included the creation of an energy-efficient building at an important entrance to Matlock, with associated local spending in the town centre by new residents, plus a significant contribution to the District Council’s local affordable housing objectives.

“I’m sorry some people in Matlock aren’t completely happy with it but I just see this as a dead area at the moment and hope it will be a wonderful addition to the town’s housing stock near the award winning Hall Leys Park.”

Haul of drugs, cash and weapons seized by police in North Derbyshire.

Officers targeting organised gangs in North Derbyshire have seized more than £20k in cash, class A drugs worth more than £10k and numerous knives, bats, and an imitation firearm. The Organised Crime Group Team, based in Chesterfield, is specifically set up to detect, disrupt and bring to justice serious and organised criminal gangs. From 29 April to 21 July officers arrested 35 people in targeted investigations in the Newbold and […]