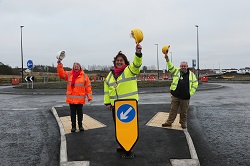 We led the project which had to be halted when its main contractor North Midland Construction went bust.

But following a lot of hard work behind the scenes, we stepped in as principal contractor to co-ordinate the completion of the single-carriageway road which measures almost a mile in length.

As well as opening up land in the area for development, the road will ease congestion on existing roads in the area, particularly Clock Island in Woodville where the A511 joins the A514.

The £13.4 million project was funded jointly by ourselves with a contribution of £7m and the D2N2 Local Enterprise Partnership, which earmarked £6.4m from its Local Growth Fund.

“We’re delighted that the new Woodville to Swadlincote link road is now open.

“We know how long people have waited for this road and I’d like to thank residents and businesses for their patience following the unexpected delay and apologise for any disruption which may have been caused.

“The road will be great for the local area and will allow for land redevelopment along the route, opening up opportunities for new housing and business development.

“I’d like to thank everyone involved in making the project a success.”

Preparations will be made to allow landscaping to take place after Christmas.

“The opening of the new link road will be key to shaping the future of the Swadlincote and Woodville areas. It has the needs of the local community at its core, supporting the creation of homes and new jobs to improve the prospects for the whole area.”

Derbyshire County Council public health team will be handing out free COVID-19 lateral flow test kits in several Derbyshire towns over the next 3 days. The nasal swab kits, designed to be used by people with no symptoms of COVID-19, will help prevent the spread of the virus. People are encouraged to carry out a test before mixing with friends and family over the festive season to help prevent the spread of COVID-19. The kits will also support the daily […]