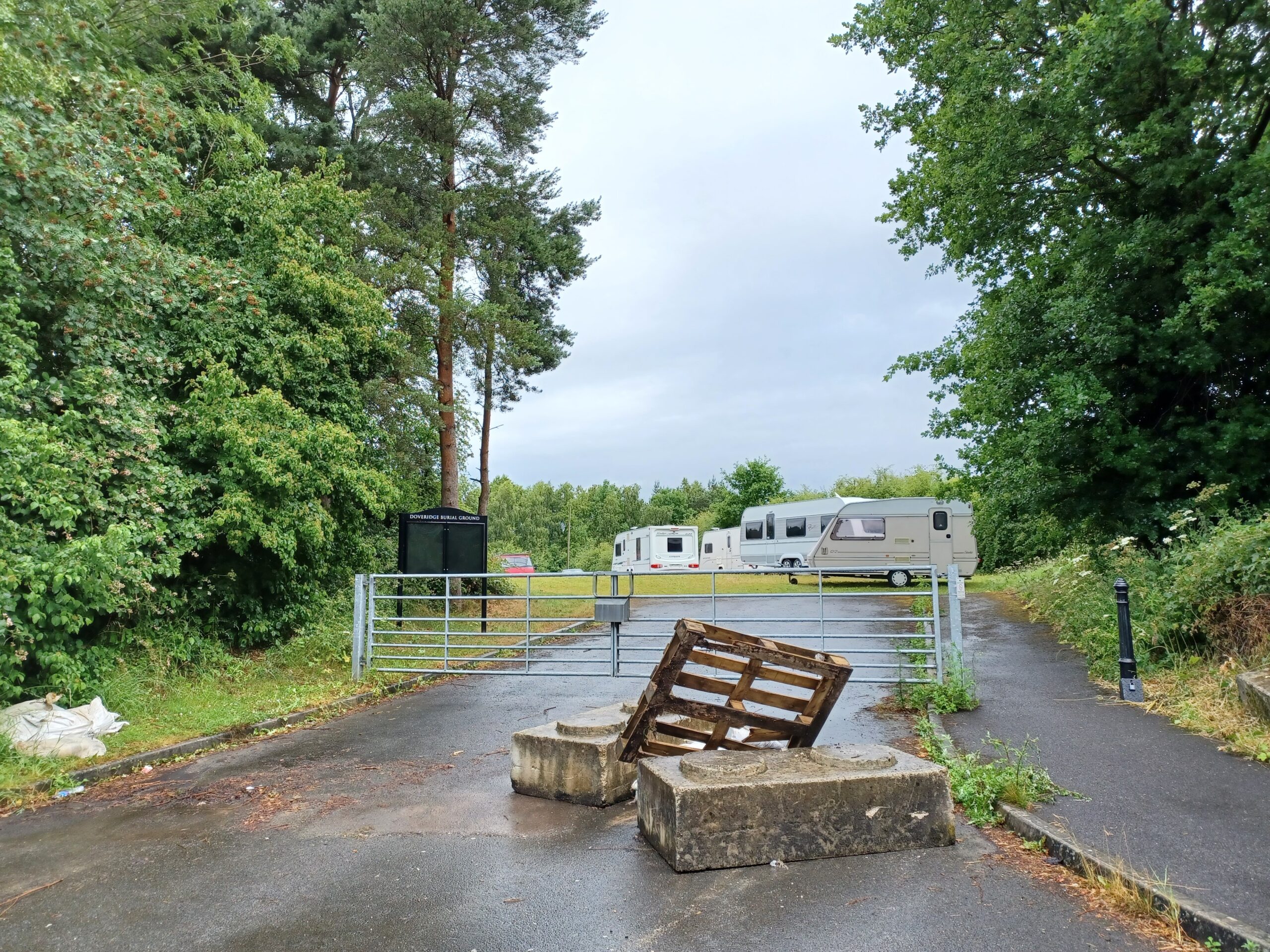 A family of Derbyshire Gypsies have spoken out about the years of racism, violence and abuse they have faced in their search for a permanent place to call home.

At the new Doveridge burial ground site, at the end of Derby Road, two members of a well-known Gypsy family, who do not wish to be named, shared their experiences with the Local Democracy Reporting Service.

This includes the family being shot at in the middle of the night while staying on a car park in Rowsley and numerous incidents of stones being thrown at the family, including the children.

Early on Sunday morning (June 26) five caravans and numerous vehicles were moved onto the new Doveridge burial ground site, which is not yet in use but has been consecrated. Bouts of heated confrontations have allegedly occurred between residents and the family, with villagers blocking the access road with vehicles and replacing concrete blocks in front of the site gates.

The family, who identify as Romani Gypsy, will be moved to the Clifton Road coach and car park in Ashbourne next week, another site which they do not want to move to and say is unsuitable.

Derbyshire Dales District Council has a legal duty to accommodate the family, who have formally declared themselves homeless, but the authority continues to fail to provide a permanent site for Gypsy and Traveller families.

A member of the family told the LDRS that over the years she has faced “a lot of abuse”, but said: “It doesn’t bother me anymore, we are used to it, you get used to all the abuse thrown at you.

“Some people are nice and you try to ignore the nasties. The Gypsy community are used to it, love. You have to rise above it. They might be ignorant but we rise above it.”

On the decades-long wait for a permanent Gypsy and Traveller site, she said: “We have been waiting for years and it is never easy being moved from place to place, from car park to car park.”

She has an autistic son and tells the LDRS: “It is really difficult for him, he gets used to one place and to the situation and then we are moved and it takes time for him to settle in.”

She says noisy sites, such as town centre car parks, are far from ideal.

A site out of view of the public where the family can have a normal level of privacy – the same as all homeowners have – is all that is required, she said.

She said: “Imagine someone walking into your house and staring all day and night, and standing outside and talking about you, like you are stupid or something.”

Each caravan is a private home for each member or members of the family, she explains, and privacy is a core priority, just like in a bricks-and-mortar house.

Asked why the family were looking for a permanent site, she said: “We like the lifestyle, but at a certain point in your life you want to settle.

“It is good for the young ones but now we want a bit of comfort, to have electric and conveniences. It is always more difficult in the winter and somewhere where there is no water.

“It is about the freedom, and it is what you have been born into, it is more difficult for the young ones who are settled and are in schools, but this is the only life I have ever known.”

Talking about how the abuse they have faced affects the wider family, including children, she said: “The kids are used to it now as all, and we just try to put the abuse down to their ignorance. They are high-society people but I’ll leave it to their ignorance, because we know better.

“The only thing you can do for people like that is pray.”

On the long wait for the site she said: “It has been 30 or more years, I have lost count, moving from car park to car park.

“We are not asking for a mansion on a hill with big gates and walls, I am just asking for a little bit of land with some conveniences on it. Just as long as it has got a few facilities on it, nothing special – just as long as there is somewhere for us.”

On the repeated moves, she said: “It is very upsetting at times, you have to try and rise above it and go again, we have had so many let downs and are just told again that we won’t have a site, someone says something and we start again.

“You get all that expectation and then there is nothing at the end of it all.

“It is just moving all the time that is so stressful. We get settled and then get uprooted.”

She said a site in the south of the Dales was preferred.

In June, the district council rejected plans for a permanent Traveller site at the Woodyard near Homesford, several kilometres from Cromford.

Meanwhile, the council had considered assigning land off Knabhall Lane near Tansley as a permanent Traveller site and spent 18 months investigating the plot, before deciding to drop it in April.

Speaking about the reaction from protesting residents, she said: “We just get abuse, we have had stones thrown at us, that is just some people, we get stones thrown from time to time.

“They shot at us in Rowsley about three years ago. They shot through the side of one of the caravans. That was really scary. We are used to stones and abuse, but they are really, really wicked people.

“They didn’t know if there were kids in that caravan or grown-ups or whatever, and there were people in it.”

A police statement from August 2018 confirmed that the force responded to an incident involving two shots from a shotgun being fired at two vehicles on the Bakewell Road site in Rowsley.

Chief Inspector Barry Doyle said at the time: “This was a very serious incident that could easily have resulted in someone being killed or very seriously injured.”

The Gypsy family member said aggression from members of the public has become worse towards the Gypsy and Traveller community over the years, though she said there are some nice people who are more welcoming.

“You have got to get to know a person before you understand, you can’t just blame everybody, there is good and bad in everybody. You can go and knock on the doors in that housing estate over there (in Doveridge) and it would be the same there too,” she said.

Talking about the worsening racism towards Gypsies, she says social media has had its part to play with “bullying”, “evil” and “malicious” messages being shared, which she says is harder for the younger members of the family who are more aware of it.

A second member of the family told the LDRS: “It is hard for us, there are just so many racists. We are moved from car park to car park and the district council say they are going to make a permanent site and then they don’t.

“It is hard to be sent from one place to the next and when the council says it is ‘going to do everything in our power to get a site’ they never seem to keep to it. I think they should keep a few of the promises. They haven’t done that, not in the last 20 years.”

She said: “They should be doing a lot more to help us, they keep finding pieces of land in the middle of nowhere, 10 miles to the nearest shop. There was a promise made about Tansley and that has fallen through as well.”

The Ashbourne coach park site is not “ideal”, she says, because of the noise associated with a car park and the impact this will have on the autistic member of the family.

She said: “We have been told we have to go and that there is no other choice, so we will go, but it is not ideal. They should be able to find other sites after all these years.”

On the accusations made about the family, and other Gypsy and Traveller groups, causing disruption and allegations of crime, she said: “We don’t go around thieving, we don’t rob, we aren’t nasty, they just don’t like us.

“You know that – we will offer you a coffee or a tea – I bet nobody else around here has offered you that.

A district council spokesperson said: “We have started eviction proceedings at the Doveridge site. The Traveller family, which are known to us and have a local connection to the Derbyshire Dales, are being directed to a newly designated site in the council’s ownership.

“An urgent decision on behalf of Derbyshire Dales District Council has been taken to designate sites in Ashbourne and Matlock for temporary occupation by Traveller families with a local connection to the Dales.

“The decision taken using delegated powers is to accommodate a family member’s urgent medical requirements. The decision has been taken after consultation with the chairman, leader and deputy leader of the council, local ward members and members of all political groups represented on the council.

“It follows an approach by the Derbyshire Gypsy Liaison Group seeking the district council’s assistance and means land owned by the council at Clifton Road coach and car park in Ashbourne and Matlock Railway Station car park could potentially become temporary stopping places for Gypsy and Traveller families with a known connection to the Derbyshire Dales.

“All we can do is attempt to manage this situation. The immediate needs of this family member include having access to a site with running water due to the family member’s medical situation.

“It is well known that the district council has sought to establish permanent and temporary Traveller sites in the district for decades and has not yet allocated a site for this purpose.

“In July 2021, the district council voted against adopting a number of proposed locations as negotiated stopping places and did not delegate authority to officers to control the location of homeless families.

“In the absence of this, officers do not have a formal position of the council to rely upon to manage any issues that may arise, such as this one.

“Given the personal circumstances of the family concerned and pressing timescales, officers sought the views of members on acceptable options, the suitability of such sites and access to water supplies which would be needed for the family.

“A report will be submitted to a future council meeting to seek a resolution from members in respect of both sites.

“The search for a suitable permanent site continues and we continue to welcome suggestions from local landowners.”

The council has scrapped a proposal to make taxi drivers install CCTV in their vehicles at their own expense after an outpouring of concern over the costs involved.A consultation was held by Chesterfield Borough Council over whether to make CCTV in taxis mandatory, however drivers commented that the cost to install it, likely to run into hundreds of pounds, would be too high for an already ‘strained’ trade.One respondent simply […]