Chesterfield’s season came to an end on Sunday afternoon after they were beaten 3-1 by Solihull Moors away from home in the National League play-off semi-final.

The Spireites got off to the perfect start when the returning Joe Quigley finished off an excellent team move after just seven minutes to put Paul Cook’s side in front.

However, Solihull found a quick equaliser when a through ball split Chesterfield’s defence and allowed Andrew Dallas to slot the ball home confidently past Scott Loach in the 15th minute.

Solihull then took the lead in the 35th minute when defender Alex Gudger bundled the ball home from very close range following a corner. The Moors extended their lead just before the hour mark when Callum Howe got in front of his marker to head the ball home from 12 yards out to make it 3-1 to the hosts.

Despite always looking strong and threatening on the counter attack all game, Chesterfield’s defence were split too easily over the whole 90 minutes and struggled to cope with Solihull’s attacks. Solihull deserved to win the game and Spireites manager Paul Cook must now look at which players he wants to retain for next season and who he wishes to release to prepare for yet another bid for promotion back to the Football League. 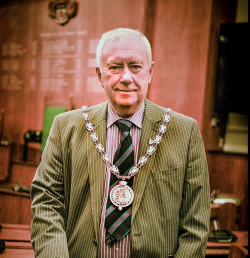 A former soldier and businessman with more than 20 years of experience as a councillor has been appointed as the new Civic Chairman at Derbyshire County Council. Councillor David Wilson, who is the county councillor for Alfreton and Somercotes, accepted his new position at our AGM on 25 May and was presented with his official chain by outgoing Civic Chairman Councillor Jean Wharmby. The Civic Chairman’s role is to act […]