Thirteen people have been arrested after a series of warrants in Chesterfield and Sheffield found drugs, cash, and weapons.

The eight men and five women were arrested by officers investigating alleged county lines drug dealing in the Newbold area of Chesterfield.

At the addresses officers found cocaine, cannabis, designer jewelry and clothing, and cash.

Twelve of the people arrested, five women and seven men, were subsequently charged with conspiracy to supply class A drugs.

Nine of those charged, six men and three women, have been remanded to prison – with others released on police bail.

Detective Sergeant Simon Cartwright said: “As a force we will not stand for drug dealing in our communities and will take action against those responsible.

“County lines gangs, who move drugs from larger cities into smaller towns, prey on vulnerable people to sell their drugs and bring real harm to the areas in which they operate.

“I would urge anyone who believes that drug dealing may be happening in their area to contact the force at any time, in confidence.

“We rely on a flow of information to support the investigations and help direct support from partner agencies to those individuals who have been exploited.

“The force is working closely with Chesterfield Borough Council – as well as other agencies – to tackle both the criminals responsible for dealing drugs and the wider issues surrounding those who are using the drugs and help move them away from the cycle of addiction.”

Councillor Jill Mannion-Brunt, Chesterfield Borough Council’s cabinet member for health and wellbeing, said: “Each day, officers are working hard to remove drug dealers from our communities and the council is doing everything it can to support them in their efforts.

“I would urge anyone with any information about county lines drug dealing that is happening in their area to report it. All the information received, no matter how seemingly insignificant, helps build a picture of activities and build evidence that can help bring dealers to justice and help to protect vulnerable people.”

If you have information about drug dealing in your area then you can contact the force using any of the below methods: 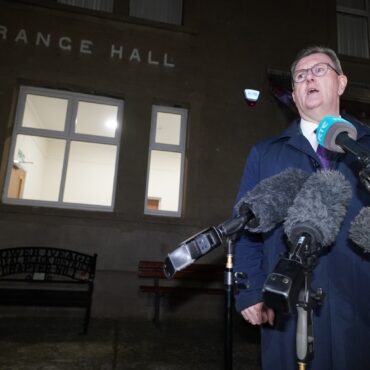 The chances of problems with the Northern Ireland Protocol being resolved before Stormont Assembly elections in May are “quite small”, DUP leader Sir Jeffrey Donaldson has said. Sir Jeffrey said there was “very little progress” in ongoing discussions between the UK Government and the EU. European Commission vice-president Maros Sefcovic and Foreign Secretary Liz Truss met in London on Friday as part of their attempt to break the deadlock over […]