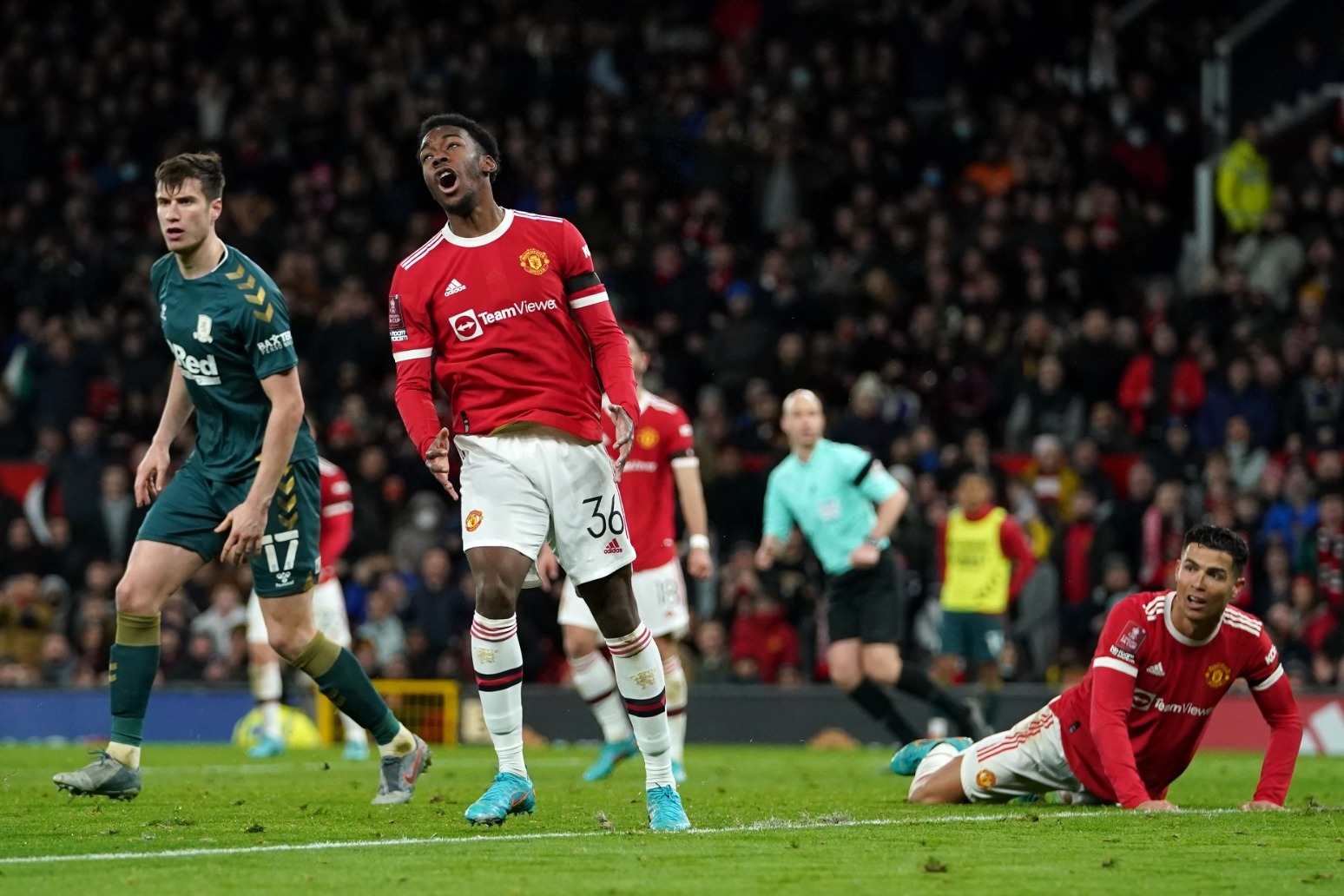 The fourth round got off to a stunning start on Friday night as the Premier League giants arguably saw their last realistic hope of silverware this season extinguished by Chris Wilder’s Championship outfit.

Jadon Sancho opened the scoring for Ralf Rangnick’s star-studded side, but lifelong United fan Matt Crooks levelled and the match finished 1-1 after extra-time.

Every penalty found the net until Elanga struck his into the Stretford End, wrapping up an 8-7 spot-kick success for Boro and sending the 9,500 visiting fans wild.

Few could have seen the match going the distance given the way United started.

Sancho hit the crossbar inside 80 seconds of a one-sided first half in which he would fire the hosts ahead via a slight Isaiah Jones defection shortly after Cristiano Ronaldo’s penalty miss.

Boro had looked limited but the hosts’ profligacy hurt them and Duncan Watmore crossed for fellow former United youth player Crooks to score in front of the raucous travelling Teessiders.

Most inside the stadium expected the goal to be ruled out for Watmore’s handball in the build-up, but it was apparently deemed accidental by both referee and VAR.

Fernandes inexplicably managed to hit a post with the goal at his mercy and the match went to extra-time and then penalties, with Elanga’s missed spot-kick the difference.

The build-up to Friday’s match was dominated by United forward Mason Greenwood’s arrest and subsequent release on bail.

The 20-year-old remains suspended by the club and no signs of him were visible around Old Trafford, where his shirts were not stocked and his name was removed from the back of the programme.

Greenwood was among the changes to United’s last match, with Paul Pogba the headline incoming name as he returned from a three-month injury lay-off.

United flew out the blocks and Sancho sent a fine effort onto the crossbar following an early mix-up in the Boro defence.

It would have been a brilliant goal, as would the Ronaldo efforts that soon followed before the normally reliable frontman wasted a far easier chance in the 20th minute.

Boro defender Anfernee Dijksteel slipped in the box and brought down Pogba, leading referee Anthony Taylor to point to the spot.

Camera phones were at the ready as Ronaldo stepped up, only for the star to strike his penalty wide.

Boro celebrated but within five minutes their goal was breached.

Pogba intercepted and Fernandes fired over to Sancho on the left, with the summer signing showing nice footwork before hitting a drive that went in via a touch from Jones.

United quickly hunted for another goal. Ronaldo threatened as Fernandes pulled the strings, with visiting keeper Joe Lumley relieved to see the offside flag raised when a Marcus Rashford strike squirmed through.

There were further attempts before half-time, when fans were informed a technical fault would prevent them from buying food or drink. Chants calling for the Glazer family to leave greeted that update.

Boro were lucky to still be in the tie at half-time given a wayward Folarin Balogun strike was all they had managed but United continued in an inefficient fashion.

As United toiled at one end, Boro were beginning to unsettle at the other.

Dean Henderson did well to prevent Crooks scoring from a Jones cutback and soon the United fan would have a moment to cherish.

United’s defence were caught out of position as Jones swung over to open Watmore on the left, with the substitute crossing for Crooks to turn home.

The Boro midfielder wheeled off in full-hearted celebrations that, to the surprise of most inside the ground, were not shortlived given Watmore had handled in the build-up.

United looked punch-drunk after the concession and play became stretched, although the home side were still creating more.

Rashford was denied and Fernandes inexplicably failed to score when cutting out Lumley’s poor pass on the edge of the box, the Portugal playmaker firing against the post with the goal at his mercy.

Fernandes dragged wide as frustration grew, with Elanga heading straight at Lumley from a stoppage-time Fred cross as the match went to extra time.

Neither side managed a clear-cut chance in the first half of additional time as the players visibly tired.

Fernandes headed narrowly over in the second period of extra time, with Henderson coming to the rescue in the 115th minute to prevent Aaron Connolly flicking home before the match went to spot-kicks.

Every effort found the net until Elanga missed the target, sparking jubilant celebrations from all connected to Boro. The United academy graduate was consoled by team-mates as fans sung his name.

Chesterfield FC have confirmed the departure of manager James Rowe by mutual consent. In a very short statement on the official club website it read... "Chesterfield Football Club and James Rowe have today come to an agreement that his position as manager will terminate with immediate effect by mutual consent. The club would like to thank James for his achievements during his tenure and wishes him well for the future" […]