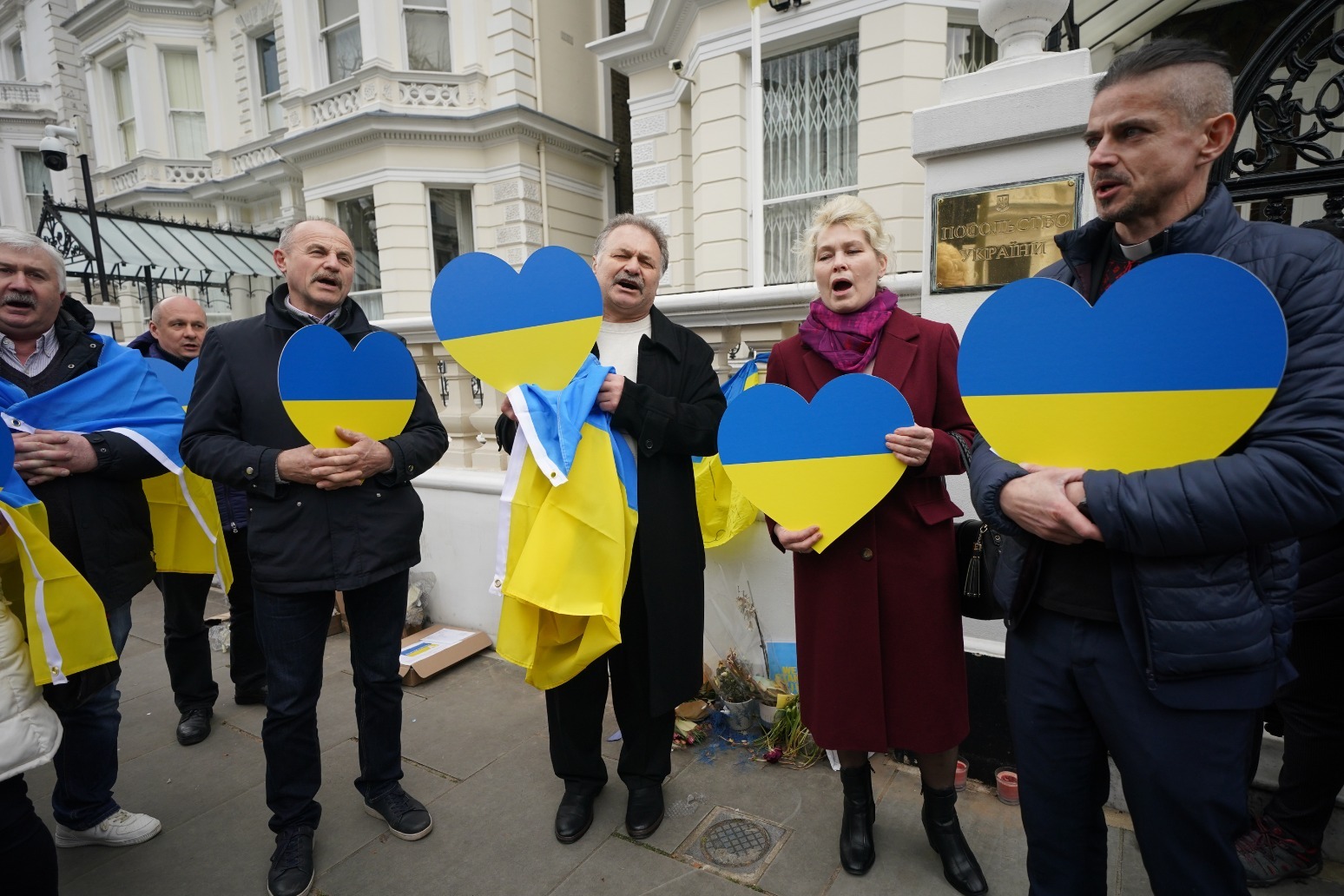 There’s been widespread condemnation of the scenes from Bucha

Ukrainian authorities have accused departing Russian forces of committing war crimes and leaving behind a “scene from a horror movie”.

Bodies with bound hands, close-range gunshot wounds and signs of torture lay scattered across a city on the outskirts of Kyiv after Russian soldiers withdrew from the area.

As images of the bodies — of people whom residents said were killed indiscriminately — began to emerge from Bucha, a slew of European leaders condemned the atrocities and called for tougher sanctions against Moscow.

So far, the bodies of 410 civilians have been found in Kyiv-area towns that were recently retaken from Russian forces, Ukraine’s prosecutor-general Iryna Venediktova said.

Associated Press (AP) journalists saw the bodies of at least 21 people in various locations around Bucha, northwest of the capital.

One group of nine, all in civilian clothes, were scattered around a site that residents said Russian troops used as a base.

They appeared to have been killed at close range. At least two had their hands tied behind their backs and one of those was shot in the head, another’s legs were bound.

Ukrainian officials laid the blame for the killings — which they said happened in Bucha and other Kyiv suburbs — squarely at the feet of Russian troops, with the president calling them evidence of genocide.

But Russia’s defence ministry rejected the accusations as “provocation”.

The discoveries followed the Russian retreat from the area around the capital, territory that has seen heavy fighting since troops invaded Ukraine from three directions on February 24.

Troops who advanced from Belarus to the north spent weeks trying to clear a path to Kyiv, but their advance stalled in the face of Ukrainian defence forces.

Moscow now says it is focusing its offensive on the country’s east, but it also pressed a siege on a city in the north and continued to strike cities elsewhere in a war that has already forced more than four million Ukrainians to flee their country and many more to leave their homes.

Russian troops rolled into Bucha in the early days of the invasion and stayed until March 30.

With the invading forces gone, residents gave harrowing accounts on Sunday, saying soldiers had shot and killed civilians without any apparent reason.

One resident said that Russian troops went building to building and took people out of the basements where they were hiding, checking their phones for any evidence of anti-Russian activity and taking them away or shooting them.

Hanna Herega, a resident of Bucha, said Russian troops shot a neighbour who had gone out to gather wood for heating.

“He went to get some wood when all of a sudden they (Russians) started shooting. They hit him a bit above the heel, crushing the bone, and he fell down,” Ms Herega said.

“Then they shot off his left leg completely, with the boot. Then they shot him all over (the chest). And another shot went slightly below the temple. It was a controlled shot to the head.”

The AP also saw two bodies, that of a man and a woman, wrapped in plastic that residents said they had covered and placed in a shaft until a proper funeral could be arranged.

The resident who refused to be identified said the man was killed as he left a home.

“He put his hands up, and they shot him,” he said.

Oleksiy Arestovych, an adviser to Ukrainian president Volodymyr Zelensky, said scores of residents were found slain on the streets of the suburbs of Irpin and Hostomel as well as Bucha, in what looked like a “scene from a horror movie”.

He alleged that some of the women found dead had been raped before being killed and the Russians then burned the bodies.

“This is genocide,” Mr Zelensky told CBS on Sunday.

But Russia’s defence ministry said in a statement that the photos and videos of dead bodies “have been stage-managed by the Kyiv regime for the western media”.

It noted that Bucha’s mayor did not mention any abuses a day after Russian troops left.

The ministry said “not a single civilian has faced any violent action by the Russian military” in Bucha.

Over the weekend, AP journalists witnessed Ukrainian soldiers removing at least six bodies from a street in Bucha with cables in case the Russians had booby-trapped corpses with explosives before their withdrawal.

Kyiv mayor Vitali Klitschko called on other nations to immediately end Russian gas imports, saying they were funding the killings.

Officials in France, Germany, Italy, Estonia and the UK separately condemned what was being described and vowed that Russia would be held accountable.

“This is not a battlefield, it’s a crime scene,” Estonian prime minister Kaja Kallas tweeted.

Authorities said they were documenting evidence to add to their case for prosecuting Russian officials for war crimes.

As Russian forces retreated from the area around the capital, they pressed their sieges in other parts of the country.

Russia has said it is directing troops to the Donbas in eastern Ukraine, where Russia-backed separatists have been fighting Ukrainian forces for eight years.

In that region, Mariupol, a port on the Sea of Azov that has seen some of the war’s greatest suffering, remained cut off.

About 100,000 civilians — less than a quarter of the pre-war population of 430,000 — are believed to be trapped there with little or no food, water, fuel and medicine.

The International Committee of the Red Cross said on Sunday that a team sent on Saturday to help evacuate residents had yet to reach the city.

Ukrainian authorities said Russia agreed days ago to allow safe passage from the city, but similar agreements had broken down repeatedly under continued shelling.

Meanwhile, a supermarket parking lot in the Ukrainian city of Zaporizhzhia has become the staging ground for helping people who have made it out.

The mayor of Chernihiv, which also has been under attack for weeks, said on Sunday that relentless Russian shelling had destroyed 70% of the northern city. Like in Mariupol, Chernihiv has been cut off from shipments of food and other supplies.

Russian forces launched missiles on the Black Sea port of Odesa, in southern Ukraine, on Sunday morning sending up clouds of dark smoke that veiled parts of the city.

The Russian military said the targets were an oil processing plant and fuel depots around Odesa, which is Ukraine’s largest port and home to its navy.

Odesa city council said Ukraine’s air defence shot down some missiles before they hit the city. Ukrainian military spokesman Vladyslav Nazarov said there were no casualties from the attack.

The regional governor in Kharkiv said on Sunday that Russian artillery and tanks performed more than 20 strikes on Ukraine’s second-largest city and its outskirts in the country’s northeast over the past day.

The head of Ukraine’s delegation in talks with Russia said Moscow’s negotiators informally agreed to most of a draft proposal discussed during face-to-face talks in Istanbul this week, but no written confirmation had been provided.

The Ukrainian negotiator Davyd Arakhamia said on Ukrainian TV that he hoped the proposal was developed enough so Mr Zelensky and Russian president Vladimir Putin could meet to discuss it.

But the top Russian negotiator in talks with Ukraine, Vladimir Medinksy, was quoted by the Interfax news agency as saying it was too early to talk about a meeting between the two leaders.

Police are investigating a serious collision in Holymoorside. Officers were called at 10.50pm last night (Saturday 2 April) to reports that a Skoda Fabia had collided with a tree, off Harewood Road. A young woman suffered serious injuries and was taken to hospital in Sheffield. An 18-year-old man has been arrested on suspicion of dangerous driving and driving while under the influence of drugs. Witnesses, or anyone with information, should […]