A Metropolitan Police officer who used his position to try to start a sexual relationship with two “vulnerable” teenagers has been jailed for two years.

Married Pc Adnan Arib, 45, got the mobile phone numbers of both girls, aged 15 and 16, asked whether they had boyfriends, and invited them out for drinks.

The younger girl said she felt his “intentions were of a sexual nature” when Arib, who had first been called to her home by her mother, met her in a park after school.

The 16-year-old said she began feeling “uncomfortable and a bit weird” when the officer told her she was “very pretty” and invited her out while in Bethnal Green police station, east London, at around 5am.

Arib then sent her dozens of text messages, including late at night, for around two months, asking her to meet him.

The Pc, who has been suspended by the Met, claimed he wanted to offer the girls “career advice”, but he was found guilty of two counts of misconduct in a public office between April and July 2019 by a jury at Southwark Crown Court after a trial.

Jailing him for two years, of which he will serve half, on Thursday, Judge Deborah Taylor said: “What is clear from the evidence in this case is that there was a sexual undertone to your behaviour.

“Once the jury had rejected your explanation, the only inference is you were trying to gain their trust to pursue some sort of sexual relationship.”

Highlighting the “gross disparity in age” between Arib and the girls, she told him: “You were a police officer and you used your position as an officer to obtain the mobile phone numbers of two young women, who were then aged 15 and 16 respectively.

“They were both vulnerable, and in your treatment of them you abused the public’s trust in you as a police officer.”

The judge added: “I take into account that the important aspect of sentence in this case is punishment and deterrence, because not only must police officers be deterred from misconduct but the public must see that very serious punishment will be visited on those who betray the trust given to them and don’t live up to the high standards required by any police force.”

Arib first came into contact with the 16-year-old after she was picked up by police, having been reported missing on April 1 2019.

While in the station, Arib asked for her phone number and if she was in a relationship, told her she was “very pretty” and that he wanted to take her out.

He accessed a police report about her and officers later found 47 text messages had been sent between them on a phone he had initially tried to deny was his.

He told her to deny the suspected theft, got her phone number, then later asked if she had a boyfriend and suggested taking her out for a drink when they met in a park.

In a victim impact statement, she said: “I felt uncomfortable because I know his intentions were not pure.

“I felt his intentions were of a sexual nature and that he had other people waiting for us.”

Her mother said: “I feel guilty because I called the police for only £10 and then this situation happened.

“We don’t feel secure in our own home.

“I now have a lack of trust in the UK authorities because he’s a policeman.”

Patrick Hill, defending Arib, said: “The loss of his career and reputation are inevitable.

“The disciplinary proceedings will no doubt be fast-tracked in light of the jury’s verdicts.” 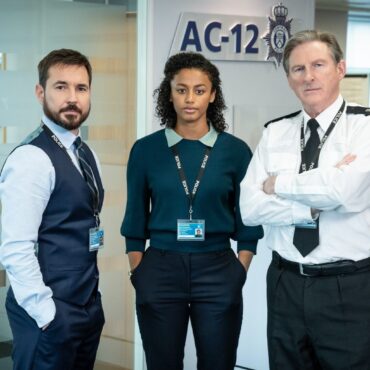 There is “definitely scope” for a seventh series of Line Of Duty, one of its leading stars has said, but people will “have to wait and see”. Martin Compston, who plays Steve Arnott in the hit BBC series, was asked on The Chris Moyles Show on Radio X if the programme was still being made and he told the host “we think so”. “I think there is definitely scope for […]