Derbyshire officers paid their respects to fallen colleagues at an event attended by HRH the Prince of Wales yesterday.

The service saw a new UK Police Memorial dedicated at the National Memorial Arboretum in Staffordshire.

Derbyshire Chief Constable Rachel Swann was joined by PC Mark Atterbury, who took part in the event’s Guard of Honour.

The Derbyshire Police family was represented by a family member of an officer who died in service.

Chief Constable Rachel Swann, said: “We often talk about the policing family and this memorial event is a perfect example of that.

“Police officers do face risks but it is being part of that family and knowing that you have got your team behind you which makes this so much more than a day job.

“We have not had an officer killed on duty in Derbyshire in modern times and we are incredibly thankful for that – it is never something that we take for granted.

“Unfortunately officers have died while in service, though. We remember them through our own memorial garden and events like this one today. Their loved ones are very much a part of our policing family and I am glad that they can be recognised, both at this event and for years to come through the national memorial.”

PC Atterbury said: “It was an honour to have been there representing the Constabulary.

“The memorial itself is incredibly impressive. I would encourage anyone to visit and to take some time to reflect on the sacrifices that so many officers have made to keep us safe.”

There was an earlier service to mark the occasion at Derbyshire Constabulary’s own memorial garden, where CC Swann was joined by Derbyshire’s Police and Crime Commissioner Angelique Foster and representatives from the staff associations in laying wreaths. 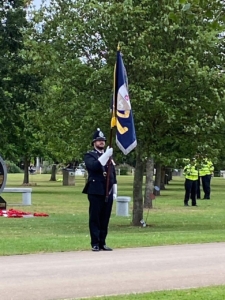 CCTV appeal after electric bikes are stolen in Tansley